Posted by viwake on September 25, 2011
Posted in: Articles, Locals, Photos. Tagged: BC wakeboarding, emma mcnichol, Hyperlite, Liquid Force, sproat lake, Vancouver Island, Vancouver Island Wakeboarding, Vancouver Wakeboarding, wakeboard, wakeboard magazine, wakeskate, wakesurf. 1 Comment
Vancouver Island wakeboarding is a growing sport.  Even though it is male dominated there are still a few talented  girls out there ripping it up. For those involved in the local competitions Emma McNichol is a common name. For those of you who don’t her name is one to start to know.  Very few girls from our Island make it to “The Next Level” of riding which you could consider landing inverts. Back in the day we had the likes of Brittany Lothrop and Kelsey and Erica Buttler, but only for a while.  It seemed as if it was a small glimpse of what might happen to women’s riding on the Island.  Luckily we now have Emma McNichol pushing the way for the new generation of female riders. I contacted Emma to get a little more info on wakeboarding and herself: 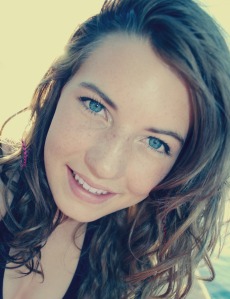 When did you start wakeboarding?
I started wakeboarding last year! Summer 2010 was my first year involved with Sproat Lake Water Sports Association. My family had always tried to spend time on various lakes during past summers but never was I exposed to such talent in water sports, to be honest I had no idea how much of a sport wakeboarding was. Clueless of the sport I went out and tried my best, I was in complete shock when I watched how the riders there could invert themselves and get crazy air! Talk about feeling out-of-place, I was happy when I could get air off the wake… That’s when my competitive edge kicked in and I tried to keep up with the other riders my age and prove that I could do well in this sport regardless of how inexperienced I was.

What is your favourite summer memory?
One of my favourite memories this summer would be placing second at the Sproat Lake tournament. Riding against girls who have been exposed to the sport for years now made it quite nerve-wracking for me. Most of the girls I ride against in my division are a year or two older as well. Along with the Sproat Tournament I think meeting new people at  Sproat makes the whole summer more memorable. Last year I met all the kids from the Club and now after spending summers together we are all family. And Sproat is a beautiful lake so we see new faces all the time! I’d have to say no matter the occasion, everyone and everything at Sproat makes summer just that much better!

Does wakeboarding ever hurt?
YES. Simple as that. Id say most wakeboarders have a pretty high pain tolerance.. Or at least develop one. If you can’t handle a little pain then you won’t get very far in this sport. First summer trying wakeboarding and I see all these kids going w2w (wake to wake) like it’s nothing.. What happens when I think I’m brave? I catch my toe edge, land flat on my face with my board bending backwards smoking me in the head. I thought I was fine, but then again it’s me.. I got a concussion. (Little did I know how common those are to wakeboarders). That was my first really hard fall. This summer I had some more interesting crashes, a few head smacks .. the usual wakeboard falls. Face plants with advil at hand for that after headache, slices on your legs from the rails, hands all ripped up from the handles. And to finish off the summer season, I wiped out and my body pretty much went into shock. But hey! No pain no Gain! Mastering those tricks and accomplishing the goals you set out for yourself make every scratch worth it! 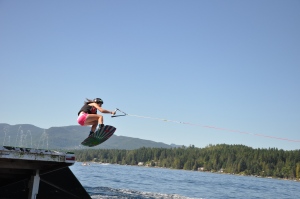 Do you ever get scared and how do you get over it?
Yes, I do. Watching other people wipe out, remembering the unpleasant feel of the crashes and the outcome of doing a trick wrong does frighten me. I talk myself into trying new things most of the time and I like to be good at what I do so I always compete with the other riders. I try to put the fact that “that’s going to hurt,” to the back of my mind and deal with a fall when it comes. I like to think of why I’m trying the tricks and how good it feels when you land what you’ve been working really hard on. Although yes, if I wasn’t scared at all I would be trying every trick I possibly could!

It seems there are a lot of boys wakeboarding, maybe more than girls. How do you find being a girl in this sport?
The guy to girl ratio is quite large I will admit! Especially at tournaments, there are so many guy riders and very few female riders. I think because the sport does involve a bit of pain and perseverance more girls opt out of doing it. Considering there aren’t as many girl riders I find myself mostly riding with the guys. Which is good because they don’t treat me like competition and they aren’t afraid to help and give me tips! On the other hand though, It gives me less to compete with during the training so I’m not always pushed. Knowing I have less competition though it gives me an advantage. I have less girls to compete with in tournaments than the boys do.
What do you do outside of wakeboarding?
Outside of wakeboarding I play school volleyball, club volleyball and fastball. And during the winter I snowboard! Id have to say most of my time is occupied with school and sports.
What are your plans for the future?
My plans for the future are to pursue my sports as far as I can and do well in school. Id love to take my wakeboarding to a whole new level and compete in Provincials and Nationals and what ever other tournaments I can enter! I really want to try the new Cable park in Kelowna and ride in Florida! I want to keep progressing with this sport, I really enjoy it! 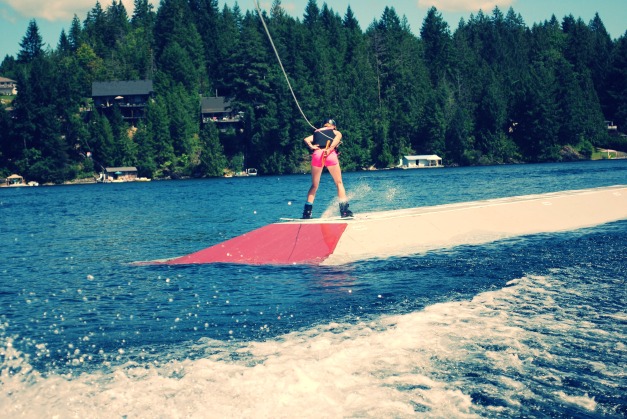 What did you learn this year?
This year I learned… lots of w2w grabs, 360’s on the funbox, grabs off the ski jump, I was working on w2w 180’s and Tantrums as well.
What’s coming next year in wakeboarding for Emma?
And for next summer,  once I successfully land my tantrum I will continue to learn my inverts! My goal is to move on to front rolls and backrolls and add style to my riding!

Posted by viwake on September 18, 2011
Posted in: Uncategorized. Leave a comment

We all know that it is bound to happen. It happens to us every year here on Vancouver Island.  The air becomes just a little crisper than normal. The lake seems to become somewhat of a ghost town with an eery silence.  Even the daylight seems to be almost white instead of the warm yellow.  It’s time for winter riding….

Winter wakeboarding isn’t for everyone. But for the select few that do, they are blessed with some of the best riding conditions (besides the cold) of the year.  Crystal clear waters with not even the slightest ripple. No need to video tape yourself as you can watch your reflection in the water without any distortion. Armed with wetsuits, dry suits, hot water bottles and lots of blankets riders take to the lake for the chance to be the only boat out.   These are the days to cherish.

This year we are challenging you Vancouver Island Riders to send in your photos that capture the true essence of winter riding.

July 28th I had the pleasure of heading up once again to my favorite place to shred,  the Sproat Lake Watersports Association. I had been hired to put on a clinic to coach the up and coming wakeboarders of the club.  Just like the previous year I was welcomed like family which ment a lot considering I was bringing up my new family to join in the fun.  This was my son Ryder’s first camping trip, first boat ride and first time experiencing wakeboarding.  For my fiance it was a chance for her to see the friends and family that I have met during my career in wakeboarding.

The turnout was great for the kids, 19 of them to be exact. Ages ranging from 7 to 17 and all sorts of levels, boys and girls.  It truly is great to see such a large group of young kids taking a liking and trying to push themselves in wakeboarding.  Everyone put 100% into learning new tricks. We had kids learning to get up for the first time, learning to jump and learning some more technical surface tricks.  And for the few really brave kids, they learned how to hit their first slider. The club had built a fun box which was perfect for all to hit. Not to forget the few club members that came out to drive the boat, without them it would have been a long day.

After a couple of days of learning it was competition time.  I unfortunately wasn’t able to make it but I was proud to see my fellow security detail members stepping it up again this year! Headed by Kris Mcnichol these neon yellow t-shirt wearing men covered the grounds making sure everything ran smoothly and that the partying was done right. Hearing it through the grape-vine I heard it was quiet the party on the saturday night needing a little more enforcement then usual. Good job boys!

As for the comp, a good turnout as usual.  Sponsors picked it up this year with Hello My Name Is Boardshop, Bill & Ted’s and Jay’s Lace It Up donating a ton of prizes. Wakeology added something new to the mix, donating a brand new wakeboard and more.  Also new to the mix was BC Wake Boat Rentals. Rocking their 2011 Tige RZ2 their presents was welcomed by all.  Surfing, wakeboarding and more was towed behind this beautiful machine.   Another few guests of the comp that made my day was the attendance of Tyler Ham, Joey Ewing, Chris Ewing, Broody Combs and myself.  All old pro’s from back in the day, we were offered the chance to head out and film for the cameras. Armed with an arsenal of riders a Master Craft from Kris Mcnichol and a couple other boats we sped off down the lake looking for flat water. Once found it was one of the best moments of the year for me. Being able to watch these guys again all shred together was definitely a highlight to the competition weekend.  Still full of talent and battling rough water these guys showed that they still had it. The energy off the boat was amazing and I’m sure felt by the 6 boats tied up watching the fun.  Look for video and pictures on tv in the near future. 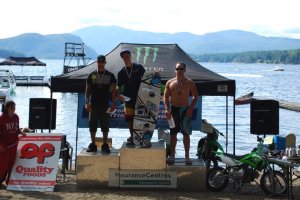 The competition wrapped up on the Sunday with a surprising finish.  As there wasn’t enough pro riders there, they had bumped up the advanced division to pro. Jimmy Frandsen took first place with Tyler Hamm second and Brody Coombs third.  Tyler Hamm after years of being away from the sport was still able to show off some of the sick tricks he’s known for and style.  Tyler’s been busy working the fishing boats and recovering from several knee injuries.  Brody after a knee injury last year was able to ride with his usual intensity. All in all it was a great show.  Can’t wait to see the up and coming riders of the future comps.